How to Fix a Toronto Roof Leak in a Shingle Roof 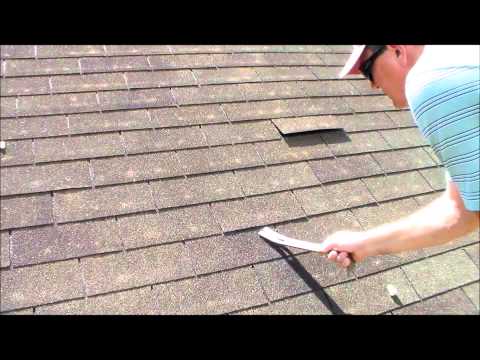 How to Fix a Toronto Roof Leak in a Shingle Roof

Today we’re going to repair a Toronto roof leak in a shingle roof and we don’t really know exactly where the leak is coming in but we have a general idea. So the first step in determining or finding or attempting to find the leak is to identify a starting point and the best thing to do is mark it either with a crayon piece of chalk or even a rock.

We’re just going to mark a tab with a rock and that’s where we’re going to start. Want to put that rock underneath the shingle as soon as I get it open. A couple of things that you’re going to need: a hammer some roofing nails, a flat bar and some roofing cement.

Probably better to get a can in this instance rather than in a tube. You’re probably going to use much more than what’s in a two so the first thing you really want to do is start getting some tabs up.

Let’s start with that first one and get our mark in place so now we’ve marked the center or what we’re calling the center and we’re going to go ahead and lift up. However many tabs we think we need to in most cases if you go just a couple of feet in either direction that’s what’s going to eliminate that area and in the future.

You can continue working your way outward depending on the direction you think the leak is in. Keep in mind this is just a repair we’re just trying to get the leak to stop so that it doesn’t leak inside and continue rotting the wood.

In most cases this is going to stop the leak permanently.

The first thing we want to do before we do anything is inspect the area we’re going to look at the general area that we’ve identified to see if there’s anything obvious. The obvious things to look for are the roofing nails that were used to put the shingles on.

Check if any of those are poking through the shingles those are visible on the surface the second thing is any decking nails that may have pulled up through the shingles.
The only thing that I saw in this area was that tab over there three rows up and one tab over from where I mark that one. This one is lifted up a little bit there’s probably some kind of a high nail in there.

If there’s a high nail there, we’re going to eliminate it so it won’t be a problem after we leave here today. That’s the only thing I saw so now I’m just going to work my way out. I’m going to go each tab is a foot so if I go three tabs that way and three tabs that way I will have cupboards 7 feet wide. Each row is approximately 5 inches so every 2 rows is approximately a foot just shy of a foot.
4 rows would easily be almost 2 feet so if you just count the rows you can get an idea of where you stand as far as go in a couple of feet in either direction.

In this case the key ways don’t line up so I’m not exactly sure I’m just going to get an idea we’re just going to go ahead and lift some tabs and get started and see what’s under there.

If it doesn’t come easy stop go at it from a different direction you can take short jabs at it sometimes that pops it loose. Take take your time get the shingle up first once you get it up it’s probably not going to stick back to itself right away, so I’ve got the center row out I’m going to go ahead and and go up four rows and I’m going to go down four rows now

For the further down you can see I put a couple of rocks so I have my area somewhat mapped out already. Now we want to methodically work our way up so we’re just going to start at the bottom and work each tab and just look at each tab and make sure that we eliminate them. First thing we can do is hit down any nails or get them nice and flat you can pull them you can put new nails in too to get it nice and flat.

Then you’re going to seal it with roof cement I’m going to do the first row and then I’m going to explain how to do it with the roof cement. I went ahead and did two rows found a couple of nails nothing major.

You don’t need to pile it up it just needs to be on there and seal it however you have to do it and however long it takes then we’re going to seal up the seam right here’s the seam in the shingle where two shingles meet.

We want to seal that all the way up under here and here there’s no reason to seal the whole thing unless you’re gluing a tab back on. The water gets under here a little bit so you want to seal it to here and then seal the two nails and that’s all you need to do there’s not going to be any holes in the shingle unless you see it but I’m going to start that’s the first row there.

Some people think you got to put the brew cement on the top and seal these seal these key ways but truthfully the problem more than likely lies in this area.
The roof still is going to look okay and you’ll never really know that the roof was repaired unless you’re ripping the shingles. If you find that you start ripping the shingles then either you’re not doing it right it’s too hot or the shingles are just way beyond repair.

A common thing when you’re slamming shingles very easy drift and again all we’re doing is this is a little leak we’re just trying to eliminate suspects. We’ll finish with this row and find our way here all the way.

That gets underneath that other shingle go all the way down to just barely see the reefs in it.
First we eliminate any holes. If you had found any loose nails before you put the roofs in it is a good time to put those in take my mark out there now I know where I’m at.

First thing you want to do is seal up the nail holes or any other holes you might find. The second thing is to put a little bit to replace the adhesive that was there. Just keep going until you don’t have any more that stepped-up or that you pulled up tonight when the rain comes. Whenever I have extra I just put it on the next one over. Get rid of some of it as you can see sometimes it comes out from beyond the shingle. You want to try to limit that as much as possible.

Sometimes it’s just going to have to stay there when you’re doing a lot of it like this. Just go to the gutter or get some sweep the roof a little bit get a few granules just lay them on top of there and it will be okay for the time being. Your choices are limited because once that tab goes down everything looks the same again.

This is where a lot of people get in trouble as you can see I just walked over a couple of these places so make sure you check your shoes before you go in the house. Now you see we sealed this area up. Sun will come out flatten a lot of this stuff out. Anything that’s really out there we can go ahead and flatten out now.

If you take a little piece of chalk or something you can mark the tab to the left you can mark the tab to the right the ball top row the bottom row just to know where you’re at.
Maybe next time the chalk will still be there but it won’t be so apparent that you can see it from anywhere and if it persists if the leak persists you can take take it up take it down take it to the left take it to the right.

There’s a lot of Toronto homes where you can’t access the Attic the roof is a low slope you just can’t get to it to see it and also often times even right where it’s coming in may not be the hole right where the hole is on the roof.