How to repair Flat Roof Leaks

How to repair Flat Roof Leaks 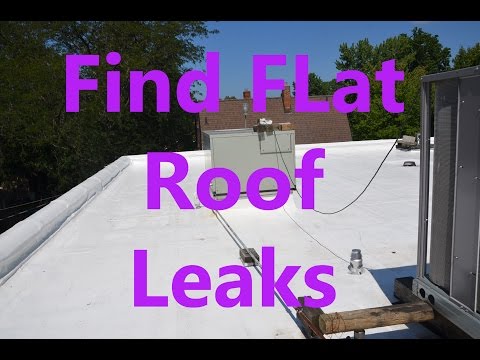 While on the roof, I asked the maintenance man to bring me a 5 gallon bucket full water. I threw several cups or water to an upper elevation brick wall. The water beaded off. I ask the maintenance man who sealed the brick. He said, that 10 years ago, when they bought the building, the previous owner disclosed that the window at this location leaked and it was repaired. He wasn’t sure about and brick sealing. He stated that since this repair, the window has not leaked. Well it was quite obvious that somebody 10 years ago knew it was the brick that was leaking and not the window. This is why they sealed the brick with what appeared to be a water resistant coating. While on the roof, I walk over to the location where one of the roof leaks was occurring.

A brick higher elevation roof wall also existed at this area. I threw several cups of water onto this brick. This time, the water was absorbed or sucked into the brick. Brick and mortar joints are naturally absorbent; this is why you need weep holes in brick. This brick upper roof wall did not have weep holes. This brick wall was once an exterior wall of an older building. The building roof that has the two flat roof leaks was an addition that was built over 20 years ago. The brick was getting saturated during long duration rains. This wall also faced the southern and western exposure which is more susceptible to weather. The water was getting sucked into Brick and mortar joints and running down that back side if the brick in the ¾ capillary space. This newer addition building had roof joists that rested on pocket ledges that were cut into the brick 20 years ago. Instead of water running down into lower levels, it escaped at these cut pockets. This was going to be an easy fix. Simply by sealing the exterior brick would fix this leak.

I did warn the owner that when you seal brick, it no longer breaths and the potential, of brick spalling may occur. I told the owner to control indoor humidity by running a dehumidifier during cold climates. The reason for this is that if you have high indoor humidity it will travel to the exterior through a vehicle called vapor diffusion. If the brick is sealed, it will act like an exterior vapor barriers. During the winter, it is cold, it freezes, and brick Spading can occur. The second leak diagnostic was also simple. Directly above this second leak was 12 year old H VAC unit. We cut into the roofing membrane at this location and encountered moisture. I asked the maintenance man to be bringing me a second 5 gallon bucket of water. This time, I dumped it into the HVAC unit fan area. It wasn’t long before the water started dripping into the room below. In the room below you could see a roof fasteners rusted and dripping water. The secretary said, the roof would leak for several days after rain storms.

This leak existed for 12 years due the HVAC installation contractor not being a roofer. This roof top unit had a roof duct penetration that was poorly sealed. The HVAC installing contractor created this leak 12 years ago. This was also an easy repair. The HVAC unit needed to be lifted and roof membrane needed to be replaced. Sometimes when looking for leaks you need to apply some building science knowledge, not just toronto roofing knowledge. Sometimes, roof leaks are not roof membrane related as they were in this case. As seen on youtube